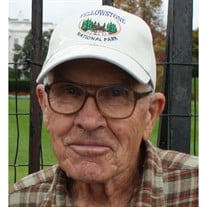 Albert H. Ross (November 14, 1924-January 29, 2019) went to that "Goldmine in the Sky" to be reunited with his Father Harry Ross, Mother Loretta, Sisters Bert, Betsy and Janet, Brother Carl Ross and his beloved wife, Helen. He is survived by his Sister, Joan Walton; Daugthers Nancy, Shirley and Beverley; Grandchildren Lisa, Dawn, Jennifer, Kristin and Jonathan; Great-Grandchildren Athena,Taylor, Ashton, Chase, Zackary, Patrick, Colton and Genevieve. He will be best remembered for his quick wit and singing.  Not a day went by when he would wake up with a song in his heart.  Always a joy to be around, he loved to entertain and make people laugh with his many jokes.  He was a beloved Husband and wonderful Father, Grand-Father and Great Grand-Father. He is to be honored for his service in the Marines during World War II.  After leaving the Marine Corp he went through the Apprenticeship to become Plumber.  He was a Plumber with the Union until 1970.  In 1970 he and Helen, along with his Daughter Nancy and grand-daughter Lisa moved to Clearwater, Florida where he started his own Plumbing business.  He was in business until 1996, when he retired.  Although, he continued to do odd jobs and even worked with Dunedin Plumbing. After he retired, he and Helen sold their house on Plateau Road and lived in the travel trailer for about a year before buying a Mobile Home at Honeymoon Mobile Home Park where they lived until 2001. Albert and Helen loved to take walks on the beach and travel.  They would pack up their van and camper and head out west, mainly to Colorado or Tennessee.  They especially loved to go to Smokey Mt. National Park, Estes Park and Rocky Mt. National Park where they would do a lot of hiking and watching wildlife.  Many times they would take all of us grand-children with them.  In 2001, Albert and Helen moved back to Laurel, Delaware.  They continued to make many trips back to Florida and even rented a Mobile Home in Honeymoon Mobile Home Park for the winter. After Helen's passing, Albert moved back to Florida in 2014 where he bought a Mobile Home in Honeymoon Mobile Home Park.  He loved going to the pool, playing bingo and entertaining the neighbors. A Celebration of Life service will be held on March 2nd at 2pm at Honeymoon Mobile Home Park clubhouse:  1100 Curlew Road, Dunedin FL  34698.

Albert H. Ross (November 14, 1924-January 29, 2019) went to that "Goldmine in the Sky" to be reunited with his Father Harry Ross, Mother Loretta, Sisters Bert, Betsy and Janet, Brother Carl Ross and his beloved wife, Helen. He is survived by... View Obituary & Service Information

The family of Albert Harry Ross created this Life Tributes page to make it easy to share your memories.