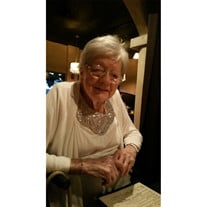 Angela Casamo 12/22/25-4/30/17 passed away at the Empath Hospice surrounded by loved ones. She is predeceased by her husband of almost 50 years, Anthony Casamo.  She is bereaved by her children Joan and Linda (Clarke) of Clearwater, FL, Patricia and Christopher (Laurent) of Warren, NJ, and James and Andrea Casamo of Dobbs Ferry, NY.  Her adored grandchildren, Julia and Taylor Burton and Anthony and Ashley Casamo will miss her deeply. She is also survived by Lucy Sasscer and Joe Dozzo of Clearwater, FL, children of her heart.  She also leaves behind her Godsons Frederick Conte and Joseph Lurenz and numerous loving nieces and nephews. For the last 2 1/2 years, Angela was a resident of The Royal Palms of Largo, where she was privileged to live an independent life among a community of friends, who became her daily joy, sharing meals and great conversations, playing Bridge and Canasta, and enjoying the many musical, cultural and fun events.   The devoted and caring staff were a constant, caring support to Angela and to her family, and always gave more than expected. Always fully engaged and embracing technology at 88, Angie also had an online group of family & friends, playing Words with Friends with people from all over the world, some she had not met in person, some from as far away as Australia.  They 'chatted' during the games and a proud moment was when she became number 4 on the leaderboard! She easily completed the NY Times crossword puzzle. Previously a longtime resident of Clearwater FL, she enjoyed her home, with her loving husband Tony, on the Westchester Lake, where they regularly welcomed family and friends with exquisite hospitality. A young widow she continued to open her home when she wasn't off on one of her many adventures throughout the US and in Europe or cruising the seas. She grew up in Johnson City, NY where her parents, Frederick and Philomena Conte, instilled in her a deep and abiding lifelong faith.  A 40's singer in her youth, Angelina Conte 'Connie Angel' entertained WW2 service men and women, as well as the general public, with her beautiful voice in clubs and on the radio. Angela was also a resident of the Bronx, NY, where she was active in both the PTA, Girl Scouts, and had a longstanding career as an OB/GYN Office Manager with an amazing work ethic. She later moved to Ardsley, NY having a beautiful yard for family gatherings, while hosting many holidays with fantastic home-cooking.  Their home was adorned with many 'treasures' they found searching for their favorite collectables.  In 1994, Angela and Tony relocated to their most beloved Florida home. Angela, always an engaged citizen, had hoped to live to see the first woman President. The family has requested in lieu of flowers please consider a donation to either: Tribute Donation | Hydrocephalus Association www.kintera.org The Hydrocephalus Association (HA) is dedicated to helping families and individuals whose lives have been touched by hydrocephalus as well as the professionals. or the Caregivers Support Network Caregivers Support Network - Our Mission www.caregiverssupportnetwork.org CAREGIVERS SUPPORT NETWORK | 400 LAKE AVENUE NE, LARGO FLORIDA 33771 | 727-647-1167 . The Caregivers Support Network is a 501(c)(3) Minnesota Corporation . .

Angela Casamo 12/22/25-4/30/17 passed away at the Empath Hospice surrounded by loved ones. She is predeceased by her husband of almost 50 years, Anthony Casamo.  She is bereaved by her children Joan and Linda (Clarke) of Clearwater, FL, Patricia... View Obituary & Service Information

The family of Angela Casamo created this Life Tributes page to make it easy to share your memories.