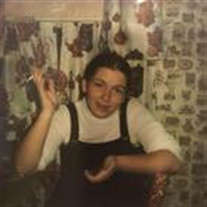 Anna (Dudinski) Knutson (formerly Sumpter), age 61, previously of Chicago IL and Edgerton, WI passed away on June 30th at her home in Dunedin, FL after a short battle with lung cancer. She was born July 11, 1954 in Caracas, Venezuela to Ukrainian parents. Anna moved to the United States with her family at the age of two, settling in Chicago, where she grew up as a member of St. Sophia Ukrainian Orthodox Church. She was educated in Chicago public schools.In 1970, she met Benedicto Rios Rodriguez, the father of her two children. They lived together for eleven years while raising their sons Anthony and Ricardo.Anna was employed at the Edgerton Oasis truck stop in the early-to-mid 1980's, and later purchased and ran her own cleaning business, Classy Maids, in Janesville, WI. Anna moved to Florida in 1992 where she was employed in the hospitality industry in and around the Tampa area. In recent years, she was joined in Florida by her son Ricardo, who was dedicated to caring for her throughout her recent illness.Anna loved to socialize and was a natural people person. Anyone who met Anna was immediately put at ease by her positive attitude and distinctive sense of humor. Many remark on remembering Anna's infectious laugh. She will be remembered for her generous nature and always welcoming personality.Anna is preceded in death by her father Ivan Novikov, step-father Ivan Mucha, mother Katherine (Alvin) Wilson, step-father Alvin Wilson, mother-in-law Luz Rodriguez, father-in-law Benedicto Rodriguez, sister Nena (John) Metoyer, brother-in-law John Metoyer, nephew John Metoyer and niece Teresa (Nick) Jarding.She is survived by her sons Anthony (Anne) Rodriguez and Ricardo Rodriguez; step-son Benedicto Rodriguez; step-daughter Donna (Isidro) Ibarra; grandchildren Taylor Rodriguez and Kaitlain Dittberner; great-granddaughter Aria Rodriguez; step-grandchildren Mitchell, Anthony, Jonathan, Vanessa, Sheila, Nicole, Matthew, Michael and Benny; and many nieces and nephews.In lieu of flowers, the family suggests donations in Anna's memory to the American Lung Association or a charity of your choice.Anna's children will host a gathering in celebration of her life from 4 to 8 p.m. on July 8 at the Anchor Inn, located in their hometown of Edgerton, WI. Condolences may be shared via the Sunset Point Funeral Home, 2689 Sunset Point Rd, Clearwater, FL 33759, www.sunsetpointfuneralhome.com. SERVICES Reception Friday, July 08, 20164:00 PM - 8:00 PM Anchor Inn Edgerton, WI

Anna (Dudinski) Knutson (formerly Sumpter), age 61, previously of Chicago IL and Edgerton, WI passed away on June 30th at her home in Dunedin, FL after a short battle with lung cancer. She was born July 11, 1954 in Caracas, Venezuela to Ukrainian... View Obituary & Service Information

The family of Anna Knutson created this Life Tributes page to make it easy to share your memories.