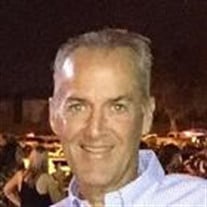 Barrie P. Fee, 56 of Clearwater, Florida passed away on January 7th 2014 surrounded by his loving family. He fought a long, hard, strong battle against cancer for a year and a half and never lost his faith, complained or gave up. He was born in Utica, New York. He graduated from Notre Dame High School and moved to Rochester, NY to attend Rochester Institute of Technology where he earned his Bachelor's degree in 1980 and Masters of Business in 2011. He had a long and successful career with Bausch Lomb for 32 years. After 30 years in various financial roles, he took on a new role as Vice President of Operations running a manufacturing plant at their Clearwater, Florida and Rancho Cucamonga, California facility. Barrie really enjoyed this new position, and especially working day to day with the associates in Clearwater. He was admired and respected for his innate intelligence, distinct ability to analyze any situation, his strength of character and generosity. Barrie was an avid golfer and a member at Riverton Golf Club, Brook Lea Country Club and most recently Cypress Run Golf Club. He enjoy many years of comradery and spirited wagering with his fellow golfers. Barrie was a general all around sports enthusiast. He and his brother co-owned a horse and enjoyed spending the day at the track. He was a devoted New York Yankee (and Derek Jeter) fan. A loving husband and devoted father, Barrie enjoyed spending time traveling with his family and enjoying their Arizona home. Barrie's infectious personality and quick wit drew people to him immediately. Barrie was a very special man and will be missed by so many. Barrie is survived by his loving wife and best friend, Michelle (Sadler), step-daughters Rachael and Stephanie Miles, brothers Gregory Fee and Kevin (Elyse) Fee, in-laws Gerald and Patricia Sadler, brother-in-law Michael (Donna) Sadler; nieces, nephews and loving cousins and friends. He was predeceased in death by his parents John and Catherine Fee. A celebration of his life will be on January 17th at 9:00AM in Spiritus Christi Church 121 N. Fitzhugh Street, Rochester, NY 14614. In lieu of flowers, memorial contributions may be made in his name to St. Jude's Children's Hospital.https://shop.stjude.org/GiftCatalog/donation.do?cID=14262&pID=24671

Barrie P. Fee, 56 of Clearwater, Florida passed away on January 7th 2014 surrounded by his loving family. He fought a long, hard, strong battle against cancer for a year and a half and never lost his faith, complained or gave up. He was born... View Obituary & Service Information

The family of Barrie P Fee created this Life Tributes page to make it easy to share your memories.

Barrie P. Fee, 56 of Clearwater, Florida passed away on January...