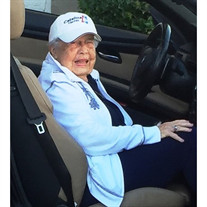 Betty Jean Wiard 1927 to 2021 (94 years Old)        Betty Jean (Jackson) Wiard, of Clearwater Florida passed away at her home due to complications from cancer on Friday, September 24, 2021, at the age of 94.  She was with her family and friends.  Betty was born on February 19, 1927, grew up during the Depression and World War II, and graduated from Paseo High School and attended college in Kansas City.  Near the end of World War II, she met her husband, Howard Wiard, whom she married on August 1, 1947 and was happily married for 63 years until his death in 2010.  Betty and Howard had a family of 3 boys, Darrell, William (Bill) and Kevin, and raised their family in Johnson County, Kansas, a suburb of Kansas City.          Between family and work, (Betty ran the Rock Island Railroad Credit Union in Kansas City, Kansas for more than 20 years) she raised her family and imparted to her boys, along with her husband, a strong tradition of family, education, sports, love of the outdoors, and, in particular, boating and anything to do with the water.   In the early 1970's, Betty and Howard took up sailing, first on Lake Quivira in Kansas City, and then on Lake Perry, near Topeka, Kansas.  Also during this time they began sailing the Caribbean with their close friends, Keith and Margaret Holland.  In 1976 they took their entire family for the Bicentennial on a sailing trip to the Caribbean on a 41' sailboat chartered from the Moorings, Ltd, located in Road town, Tortola, British Virgin Islands.  Within 3 years, all three of their sons were working at the Moorings, Ltd as charter sailboat skippers, and, within a short time, Betty and Howard purchased their own 47' charter yacht, 'Parandah', which was operated by the family in the Caribbean for the next five years.        In 1997, with two of her children married and living in Clearwater, FL and both with grandchildren, Betty and Howard moved to Clearwater Beach to be near family and grand kids.  During this time, they were able to see their children and their families grow, prosper, play soccer, graduate high school, go to college, and enjoy life on the west coast of Florida.        Betty is survived by: her three sons, Darrell Wiard and his wife Nancy (Merritt, North Carolina), William Wiard and his wife Diane (Clearwater, Florida) and Kevin Wiard and his wife, Tammy (Plymouth, North Carolina); three grandchildren, William Barton Wiard and his wife Whitney, Brett Jackson Wiard and his wife Chloe, and William Jackson Wiard; and two great grandchildren, Jackson Reid Wiard and Brayden William Wiard.        The family wants to particularly thank Heidi and her mother Ingrid Roberts, friends of the family who assisted Betty with her personal care during the last year of her life.  Not only are they skilled professionals but caring and great friends.        Betty is truly the embodiment of the Greatest Generation, she loved, persevered through tough times, worked hard, built a great family, and enjoyed her life.  As the "Greatest Mother' of the Greatest Generation, we will truly miss her wisdom, patience and love.     The family will plan a Celebration of Life event at a later date when all family members and friends can attend.

The family of Betty Jean Wiard created this Life Tributes page to make it easy to share your memories.