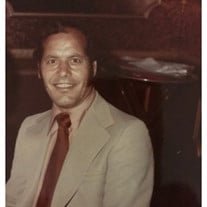 Charles Anthony Prizzi, Sr. 88, passed away surrounded by his family on September 15, 2021.  He is survived by his loving companion of over 40 years, Leda Scognamiglio of Clearwater, FL, his four children: Mary Galligan (Jack) of Annandale, NJ, Charles Prizzi, Jr. of Jersey City, NJ, James Prizzi of Phoenix, AZ, and Lynne Gaddy (Scott) of Newnan, GA.  Charles also leaves behind seven grandsons: Casey Galligan (Gina), Kevin Galligan, Ryan Galligan (Michelle), Steven Prizzi (Nicole), Michael Prizzi (Tiffany), Jonathan Gaddy and Justin Gaddy, as well as five great-grandchildren: Charlotte Galligan, John (Jacky) Galligan, Tavner Prizzi, Jolene Prizzi and Liam Galligan.  He is also survived by his last surviving sibling Carmela Grandinetti of Clearwater, FL.  Charles was predeceased by his parents Concetta and Alessio Prizzi and siblings, Vincent Prizzi, Rosa Malleo, Joseph Prizzi, Maria Giammanco, and Anthony Prizzi who all eventually immigrated to the United States.                 Prior to becoming a naturalized citizen in 1958, Charles was born Ciro in 1933 and was raised in the small town of Bolognetta, Sicily. He travelled alone at the age of 18 to the United States on the M.V. Italia arriving in New York City in 1951.  Charles (Charlie) raised his family in Maplewood, NJ and made his career as a general landscaping contractor in the Montclair area of NJ.  In addition to enjoying time with his family, Charlie had many hobbies including bowling, dancing, card playing, traveling and especially his favorite sport golfing.  One of his greatest loves was gardening and he always produced a plentiful crop of tomatoes, string beans, zucchini, and the like. In 2014 Charlie and Leda permanently retired and relocated to Clearwater, FL at the On Top of the World community where they had been spending their winters since 2005.  When Charlie arrived he literally felt "on top of the world" because he could finally enjoy his greatest passion playing golf year-round right across the street.                 Although Charlie was hard working, instilling a great work ethic in his children, and could silence them with a look, he had a playful side too. He was always ready with a mitt, ball and Frisbee in the trunk of his car to play a spontaneous game of catch with his kids and grandkids or anyone else that was willing. He will be remembered by his easy and charming smile as well as his sense of humor.                 The family is appreciative of all the compassionate care provided for Charles and his family at the Suncoast Hospice Care Center in Palm Harbor, FL.  In lieu of flowers, please consider donating to the North Pinellas Care Center branch at 164 West Lake Road., Palm Harbor, FL 34684 in memory of Charles.  Due to the pandemic, a private memorial service will be held by the family at a later date.

Charles Anthony Prizzi, Sr. 88, passed away surrounded by his family on September 15, 2021.  He is survived by his loving companion of over 40 years, Leda Scognamiglio of Clearwater, FL, his four children: Mary Galligan (Jack) of Annandale,... View Obituary & Service Information

The family of Charles Anthony Prizzi Sr. created this Life Tributes page to make it easy to share your memories.

Charles Anthony Prizzi, Sr. 88, passed away surrounded by his...