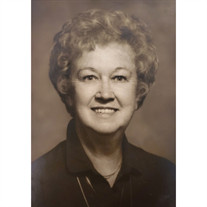 E. Bernice Reinen was born December 11th 1920, in Bayonne, New Jersey and peacefully died at North Pinellas County Hospice Center surrounded by the love of family August 25th, 2020. She was the first-born daughter of William F Reuter and Ellen "Helen" Elizabeth Coughlin Reuter and the oldest of six children. In her early childhood, the family moved to Dumont, New Jersey, to improved environmental conditions because of her asthma. Bernice excelled at school and was highly honored at her high school graduation. Although well qualified to continue to college on a scholarship, Bernice chose to take a job in NYC to help the family during the great depression and attended local Hunter College part-time. Upon completing her studies, Bernice married Joseph A. Reinen and they happily travelled the country together as he trained in and graduated from the officer flight training program for the Army Air Corps. World War II behind them, they had four children, and raised them in Brookfield, Connecticut and they were very active parishioners at St. Joseph's Catholic Church. Bernice later started the successful firm REINEN REALTY and was a community leader establishing the Senior housing complex in her hometown among other accomplishments. Bernice retired to Clearwater, Florida, and summered in Newport Beach, California to be near family. The Beloved Matriarch of her family, she is survived by Joanne Walker of Oldsmar, Florida and Emily, Minnesota (James R Walker), Marybeth Robb of Newport Coast, CA (Michael S, Robb), and Barbara Martinez of Erie, Colorado (Michael J Martinez). Also, she is survived by her brother, Bob Reuter, her sister, Rosemary Brunton and cousin, Lorraine Holmes. Her pride and joy were her grandchildren whom she prayed the Rosary Novena for faithfully through each phase of their lives: Betsy Wolfe (Patrick), Sean Walker (Jackie), Jenna Reinen (Brandon) Megan Robb, Mandy Hensley (Jon), Brooke Motley (Bobby) Kaitlyn Thomas (Kevin), Chris Robb, Molly Duenow (Shane) and Taylor Martinez. Her fierce loyalty, love and support is felt deeply by each grandchild. She is also survived by dear nephews and nieces, many who felt her positive influences more than imaginable. Bernice has 8 great-grandchildren which gave her such tremendous pleasure and happiness in her later years: Hayden, Madelyn, Brody, Harper, Ashlyn, Sydney, Dylan, and Millie. Pre-deceased by her husband, Joseph, in 2003, her son, Jeffrey W. Reinen in 2000 and her brothers; William, Gene and Edward, Bernice will be remembered as an intelligent, virtuous, warm and driven woman who almost lived an entire century and whose legacy of love will never be forgotten by those fortunate enough to be part of her life.

The family of E. Bernice Reinen created this Life Tributes page to make it easy to share your memories.