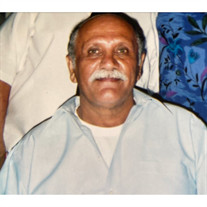 On August 5, 2021, Feridoon Taymour Davani passed away at the age of 71 at Advent Health Hospital in Zephyrhills, Florida. Feridoon was born in Abadan, Iran to Faramarz Taymour Davani and Nazi Jokar Abassi. Feridoon is survived by his wife of 44 years, Brenda Scantamburlo Davani and their son, Jack Farhad Davani. Feridoon will be remembered as an honorable, hard-working man who loved his family to the very end. Feridoon was a man that his family and friends have described as a "straight shooter" and  "the most honest man they've ever met." This is undoubtedly true. If it was within him, no doubt that it would come out of him. He was not the type of man who would put on airs or act fake with anyone. For this, he was admired by many for his frankness, his authenticity, and his heart. Feridoon was a man who loved to cook and prepare food for his family and friends. One of his greatest joys was showcasing his abilities to come up with new, creative recipes for his restaurant, Davani's Cafe, whenever the wants of his customers demanded it. He had a lot of fun doing this. He also had a lot of fun spending time with his animals. He was a man who deeply loved animals (especially birds) and had many and enjoyed taking care of them. During his life he taught his son to give to others and how important it is to be a good man. He had many people who loved him, and he will be deeply missed by all who knew him.??Throughout his lifetime, Feridoon loved and did many things. He loved politics, philosophy, and reading Persian poetry. Always quick with a recitation of a verse he'd heard long ago, he'd pepper his sentences with kernels of wisdom from ancient tomes like the Shahnameh.  It's only appropriate to include here and now an oft repeated phrase by him: ????? ??? ?? ?? ???? ??? / ? ???? ?? ??? ???? ??? Roughly translated: "Who has wisdom is powerful because of knowledge, even an old person has a young mind." Feridoon was kind and generous so much that he was, in many ways, the type of man who would give the shirt off his back to those who needed it. He had a heart of gold and the world was a better place with him in it. He will be greatly missed by his family, his friends, and by anyone who had the pleasure of knowing him.

On August 5, 2021, Feridoon Taymour Davani passed away at the age of 71 at Advent Health Hospital in Zephyrhills, Florida. Feridoon was born in Abadan, Iran to Faramarz Taymour Davani and Nazi Jokar Abassi. Feridoon is survived by his wife of... View Obituary & Service Information

The family of Feridoon Taymour Davani created this Life Tributes page to make it easy to share your memories.