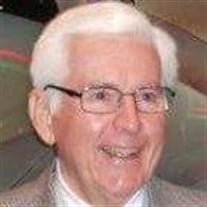 Gaylon Johnson Gaylon Johnson of Clearwater, Florida went home to be with the Lord on October 29, 2016. He will be remembered and missed by his wife of 56 years, Karen; his sons and daughters-in-love: Scott (Jeanne), Steve (Denise), Shawn (Chrissie); grandchildren: David, Brianne, Haley, Adam, Ben, Eva; 2 great grandchildren: Zoey and Ellie.Gaylon was born in 1940 in Moneta, Virginia, an only child. His family moved to Ohio where he graduated high school, and he and Karen were married on July 30, 1960. Gaylon and Karen were one of the original families in the early days of Westerville Bible Church, where he served as an elder for many years.He spent most of his working career in Ohio as an insurance underwriter. He was also an entrepreneur, and partnered with a friend to start the Manna House Christian Bookstore in Westerville. Gaylon and Karen and their 3 sons moved to Florida in 1980, where they eventually joined the staff of Clearwater Christian College - Karen in various administrative capacities, and Gaylon as Director of Christian Service, then Director of the Campus security team. However, the role they both enjoyed the most was as Papa J and Mama J - campus parents. The students of the college found their apartment to be a popular and inviting place where they could get loving advice, spiritual mentorship, or just an ear to listen or a shoulder to cry on.If you were to ask any of Gaylon's family members what were some of his favorite things, this is what might be mentioned:- spending time with his family- music, especially bluegrass- fishing - loved going to Watson's Fish Camp- practical jokes- the Ohio State Buckeyes- Spider Solitaire- coffee- "The Waltons" all day and all night- "Little House on the Prairie" when the Waltons weren't on- all of his grandchildren- wrapping gifts with so much tape that they were a challenge to open- long prayers before a meal- saving money, using coupons- his favorite chair, and anything you can imagine next to it within arm's reach- control of the TV remote, and watching a whole show with the small picture up in the corner of the screen- food, especially "country" cooking- baseball - originally the Cleveland Indians, then the Cincinnati Reds, then the Tampa Bay Rays- his dogs - Toby, Freckles, Sugar, Bandit, and Fritzi (and grand-dogs Dickens, Kahlua, Nikki, Lilly and Fenway)- his church family- sharing the GospelMost importantly, Gaylon was a born-again Christian who loved the Lord and knew without any doubt where he would spend eternity when this life was over. He leaves behind a legacy of faith in his God and love for his family, who will miss him very much. Visitation 9:30am to 10am. Funeral service will begin at 10am. Burial to follow in Sylvan Abbey Cemetery, Clearwater FL. SERVICES Visitation Wednesday, November 02, 20169:30 AM - 10:00 AM Hillsdale Baptist Church 6201 Ehrlich Road Tampa, FL 33625 Visitation 9:30am to 10am. Funeral service will begin at 10am. Burial to follow in Sylvan Abbey Cemetery, Clearwater FL. Funeral Service Wednesday, November 02, 201610:00 AM Hillsdale Baptist Church 6201 Ehrlich Road Tampa, FL 33625

Gaylon Johnson Gaylon Johnson of Clearwater, Florida went home to be with the Lord on October 29, 2016. He will be remembered and missed by his wife of 56 years, Karen; his sons and daughters-in-love: Scott (Jeanne), Steve (Denise), Shawn (Chrissie);... View Obituary & Service Information

The family of Gaylon Johnson created this Life Tributes page to make it easy to share your memories.