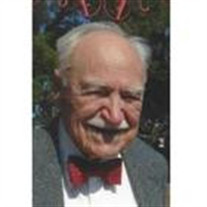 George B. Markovina, 94 Of Clearwater, passed away on January 30, 2016. He is survived by his five children, Melanie Mustone, Mariette Walsh, Madelaine Thomas, Mitchell Markon and Matthew Markon. He was the beloved grandfather to nine grandchildren... View Obituary & Service Information

The family of George B Markovina created this Life Tributes page to make it easy to share your memories.

George B. Markovina, 94 Of Clearwater, passed away on January...