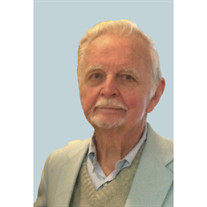 Henry John Kruszewski (1927-2017) Kruszewski, Henry John "Hank" 89 of Seminole, FL went home to be with our Lord on January 31, 2017 with his loving family at his side. Hank was born on April 4, 1927 in Akron OH to his polish immigrant parents Walter and Anna (Hoinski) Kruszewski. He was preceded in death and will be reunited with his parents Walter, Anna and siblings Helen and Joe along with his father and mother in-law, Jacob and Angela Leonhardt. Hank is survived by his loving wife, Betty and their four children, Kerry, Karen Snyder (Dave), Kevin and Kathleen Koncal (Chris); seven grandchildren, Kyle Kruszewski, Clayton and Hunter Snyder, Justin Kruszewski, and Kyle, Kole and Katie Koncal; his brother and sister in-law Jacob and Phyllis Leonhardt, nephews Matt (Missy) Leonhardt, Jon (Diane) Leonhardt and Susie Snell (Adam) and many grand-nephew and nieces. Hank grew up in Akron, Oh and at eighteen years old, he entered the United States Army and served in World War II as a specialized Marksman. He graduated at the University of Akron with a Bachelor's Degree of Business Administration. Hank met the love of his life, Betty and they were married in 1952 in Barberton Ohio. They relocated to Florida in 1962 and settled in Seminole. Hank enjoyed coaching his two sons in Little League and basketball and was always cheering on the sidelines for his four children. He appreciated the outdoors; camping with family and was an avid golfer and bowler. Hank was employed at Honeywell and then ITT Defense where he finished his successful career of 30 years as Director and Manager of Defense Procurement. In his retirement years, he enjoyed reading, traveling with his family and watching his grandchildren at sporting events. Hank's greatest enjoyment was spending time with his family and considered his life blessed with the love of his wife, children and grandchildren. He will be forever in our hearts and deeply missed. Hank and Betty's beautiful love affair would have been celebrated on their 65th anniversary, October 18th, 2017. Funeral Mass at Espiritu Santo Catholic Church Friday, February 10th - 2:00 pm, 2405 Philippe Parkway, Safety Harbor FL and resting in peace at Sylvan Abbey Memorial Park. Anyone wishing to send floral arrangements, please send to the church prior to services.

Henry John Kruszewski (1927-2017) Kruszewski, Henry John "Hank" 89 of Seminole, FL went home to be with our Lord on January 31, 2017 with his loving family at his side. Hank was born on April 4, 1927 in Akron OH to his polish immigrant parents... View Obituary & Service Information

The family of Henry John Kruszewski created this Life Tributes page to make it easy to share your memories.