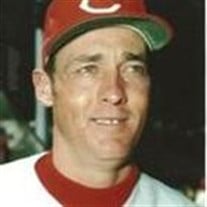 Chambers County native and former Major League Baseball player James Franklin "Jimmy" Stewart passed away at his home in Odessa, Florida on Saturday, November 24. Stewart is best remembered as a member of the Cincinnati Reds where he was known as "Super Sub," because he played every position on the field except pitcher. After his playing days ended, Stewart remained in the game serving as a scout for the Reds and Philadelphia Phillies until his retirement in 2006. Born in Opelika on June 11, 1939 to John A. and Nelle G. Stewart, Jimmy graduated from LaFayette High School in 1957 where he was a standout on the athletic fields. He attended Austin Peay State University in Clarkesville, Tennessee and lettered in baseball, basketball and track. He set numerous baseball and track records at Austin Peay and was inducted into the University's Hall of Fame in 1978. Stewart is currently being considered for induction into the Alabama Sports Hall of Fame (ASHOF).Stewart signed a Major League contract with the Chicago Cubs in 1961 and played in his first game in 1963. He would be traded across town to the Chicago White Sox in the middle of the 1967 season and was then traded to the Reds prior to the 1969 season. It was in Cincinnati where Stewart thrived as a utility player, gaining a reputation as one of the most versatile players in the game. He played in the 1970 World Series, in which the Baltimore Orioles defeated the Reds in five games. Stewart was traded to the Houston Astros just before the 1972 season in one of the most infamous transactions of all time. The Reds sent Stewart, along with Lee May and Tommy Helms, to the Astros for Jack Billingham, Cesar Geronimo, Denis Menke, Ed Armbrister and future Hall of Famer Joe Morgan. Reds' fans simply call it "The Trade," and it was a catalyst for the "Big Red Machine's" back-to-back titles in '75 and '76. Stewart told Cincinnati.com in an interview earlier this year that he "hated" leaving the Reds. "Our two kids, 5 and 7 years old, they were doing great in school and really liked it here, and I loved playing for the Reds. Loved everything about 'em. Loved the way they ran things, right on down to the no facial hair. First class. Yes sir, I hated leaving the Reds. 'We had a championship ballclub," he said. "I wish they would have traded Darrell Chaney. I'd have been in a couple more World Series." Stewart would return to that team he loved a few years later. He retired from playing in 1973 and in 1980 came back to the Reds organization, first as a minor league manager then as a scout. He assumed the role as their major league scout from 1984 through 1991 and was instrumental in building the 1990 team that won the World Series, having his hand in 15 trades that brought players such as Danny Jackson, Jose Rijo, Hal Morris, Mariano Duncan and Billy Hatcher to Cincinnati. Stewart also famously did the advance scouting on the heavily favored Oakland Athletics before the 1990 World Series, creating the scouting report that would convince Manager Lou Piniella the underdog Reds would win. Piniella later credited Stewart for playing a huge role in the Reds' four game sweep of the A's. In 1992 the Philadelphia Phillies hired Stewart as a Special Assignment scout, major leagues, where he was instrumental in constructing the team that reached the 1993 World Series. Over the next 14 years, Stewart remained with the Phillies as a scout before his retirement in '06. "Jimmy was a great judge of talent, particularly at the professional level," Phillies Chairman Bill Giles said. "He also had a knack of picking up inside information by hanging around the press rooms picking the brains of writers and broadcasters," Piniella credited Stewart with being the first scout to time the pitchers release from the mound to home plate, allowing runners to better determine when to steal a base. Today, it is standard practice by all teams. "Jim's dedication and contribution to baseball and sports has been a lifetime fulfillment," Piniella said. Jimmy retired to Florida, where he lived with his wife of 50 years, Donna. He remained active, playing golf three times a week. He enjoyed spending time with his family, which included two sons, Andy and Jimmy Jr., eight grandchildren and seven great grandchildren and an uncountable number of friends.Our father had a good long run and lived his life to the fullest, his life was full of peace and happiness."

Chambers County native and former Major League Baseball player James Franklin "Jimmy" Stewart passed away at his home in Odessa, Florida on Saturday, November 24. Stewart is best remembered as a member of the Cincinnati Reds where he was known... View Obituary & Service Information

The family of James Franklin Stewart Sr created this Life Tributes page to make it easy to share your memories.