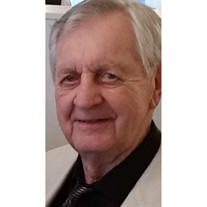 James A. Wittock age 91, died October 26 in Clearwater, Florida.  Jim was born and raised in Iron Mountain, Michigan.  He was one of four sons.  Jim was in the Army Air Corps from 1944-45 and subsequently attended Michigan Tech University in Houghton, MI where he was awarded a Bachelor of Mechanical Engineering Degree.  He owned Wittock Heating and Supply Company in Michigan and although retiring in 1978, the company is still in existence in Upper Michigan in that name. He was active in Kiwanis Club in Iron Mountain and many volunteer positions.   He had many accomplishments as County Commissioner after moving to Marquette, Mi, most notably with the innovations in the Power and Electric company there. He was married to LaVerne Albers in 1951.  They had 5 children.  Laverne passed away in 1997 after they had moved to Clearwater, Florida. Their children are Debra LaHaie, Clearwater, Florida, Bob Wittock, Warsaw, Poland, Janice Thorne, Clearwater, Florida, Ron Wittock, Everett, Washington, and Paul Wittock, Clearwater, Florida.  Also are 2 stepsons, Don Bryant of Evergreen, Colorado and Jim Bryant of Boston, Mass. There are 6 grandchildren:  Adrian LaHaie, Miami, Florida, Laura Thorne, Syracuse, NY, Nicole Lahaie, Clearwater, Florida, John Thorne, Palm Harbor, Florida, Jacqueline Thorne, Spring Hill, Fla and Jennifer Thorne, Spring Hill, Florida.   His great grandchildren are Damien, Riley, Jayda, Jordan, JJ and Brooke, and 2 step grandchildren Jon Bryant and Ali Bryant of Boston, MA. In 2001 Jim and Pat Bryant were married and have lived at Edgewater Arms in Dunedin, Crescent Oaks Country Club in Tarpon Springs and for the last 7 years at Regency Oaks in Clearwater, Florida. Jim was first of all a family man; also, an avid golfer belonging and playing at Countryside Country Club for 25 years, then Crescent Oaks for 5 years. He was a holder of master points in ACBL bridge; loved his bridge and poker playing.  He enjoyed all sports.  He was a kind, loving, gentle man who loved his entire family all through his life. He will be sorely missed by all who knew and loved him. Private services will be held by the family according to his wishes.

James A. Wittock age 91, died October 26 in Clearwater, Florida.  Jim was born and raised in Iron Mountain, Michigan.  He was one of four sons.  Jim was in the Army Air Corps from 1944-45 and subsequently attended Michigan Tech University in... View Obituary & Service Information

The family of James A Wittock created this Life Tributes page to make it easy to share your memories.