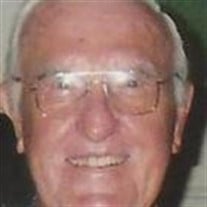 John Geistwhite, 95, of Palm Harbor, Fl. and Kankakee, Ill. Lost his battle to cancer and was comforted by his son and daughter on 12-21-2013 in the care of Bay Pines VA Hospice. He was born 10-04-1918 in Kankakee, Ill. On 05-15-1948, he married his beautiful wife Vera. She preceded him in death on 09-02-2012, as well as, his grandson Alex Geistwhite, Fire Fighter for Limestone, Ill. on 11-21-2012. A dedicated, devoted, loving, Father and Husband and a true friend to many.He is survived by his Daughter and care giver Kathy Bradley, of Clearwater, Fl, Son, Kim John and wife Delynn of Kankakee, Ill. Stepson: Lee and Sherry MacMillan, of 29 Palms, CA. Four Grandsons: Ryan and Heather, Kyle and Cari, Sean and Mandi Geistwhite, all from Ill, and Scott MacMillan from Ws. One Granddaughter: Sherron and Larry Curtis, from NV. Nine Great Grandchildren: Catlynn, Cameron, Conner, Carter, Ethan and Jax Geistwhite, from Ill. Megan (Jon) Micheals, Brandon and Christopher Curtis from NV. Four cats: Gabby Girl, Goofy, Bandit and Tattle Tails.Having to quit school in the 8th Grade, to help his Father on the family farm, he had a passion for education. He obtained his GED and Realtor's License in the early 1970's. He was a self made intellect in several endeavors and a true inspiration. After helping his father on the farm, John became an Army Veteran, serving his country for 4 years in WWII as a squad leader. He retired after 30 yrs. of service as a production worker for A.O. Smith Corp. He was a Realtor for 10 yrs with E.G. Warmbir, in Kankakee, Ill. A life member of the VFW and a member of the A.O. Smith Retiree's Org, together with his wife, they had many accomplishments volunteering for years with the Meals on Wheels in Ill and also the Ill. Bell Pioneers Club. He was an avid bowler on leagues in Ill and Fl. He also enjoyed many years of Square Dancing, Playing Cards and Bingo. John was a hard worker his entire life and a talented self made builder, together with his wife they remodeled his father's farm house, and built 4 homes to include his daughters home, which he built when he was nearly 70 yrs. old. John always lent a helping hand to his children and friends with building projects. He also plumbed and wired an entire house for a less fortunate neighbor in Ill. Together with his wife they provided their son and daughter many collective childhood memories of camping and traveling throughout the U.S to many scenic places and even taking 2 of his daughter's friends on their only vacation to Ca. Being Fortunate to have a boat, he taught several people how to water ski. He was an enthusiastic, self taught stock market analyst, who shared his knowledge with several friends and family members. His best tip was true, "Buy Anheuser-Busch because, no matter what, people will always drink". His passion in life was Horse Racing, as he has been to several tracks within the U.S. and enjoyed 75 years of going to the Horse Races. Special Thanks to Dr. Lokesh, Dr. Gorman, Rachel ARNP and Bay Pines VA Hospice for making his final journey peaceful. Heartfelt thanks to Jennifer Kennedy CNA at Bay Tree Rehab, who was my father's angel. Visitation will be held at Sunset Point Funeral Home, 2689 Sunset Point Road, Clearwater, FL. On Sunday, Dec 29, from 6-8pm with graveside services being conducted at the Veteran's Memorial Cemetery, at Bushnell, Fl., on Monday, Dec. 30, at 2 pm.In lieu of flowers, if you wish to honor John's Memory, please consider the Limestone Fire Department in Memory of Alex Geistwhite, his youngest Fire Fighter Grandson, who preceded him in death in 2012. Please send to: Kathy Bradley, 604 Hillsborough St. Lot 49, Palm Harbor, Fl., 34683 for acknowledgement of your gift that will be forwarded to the Limestone Fire Department "In Memory of Alex Geistwhite."

The family of John Geistwhite created this Life Tributes page to make it easy to share your memories.