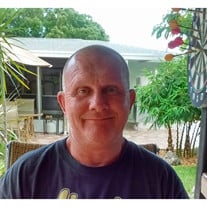 After a 5 year battle with cancer, John has left this place to collect his wings, sword, and axe to fight alongside the angels. They are lucky to have him. He will be missed by all who got to know him.                   To celebrate his life... View Obituary & Service Information

The family of John Walter Kindrachuk created this Life Tributes page to make it easy to share your memories.

After a 5 year battle with cancer, John has left this place to...