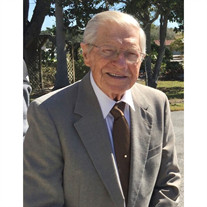 John V. Leonowicz of 29 Sabal Palm Drive, Largo, Florida, passed away on Thursday, May 13, 2021 at the age of 88 and died peacefully at Suncoast Care and Hospice Center. John was born in Philadelphia, Pennsylvania on December, 28, 1932, to his father John Leonowicz and mother Victoria Banarzok. He was one of five children. He enlisted in the Navy in June of 1951 and worked as a Physician's Assistant on the Aircraft Carrier USS Lake Champlain (CVA39) as well as various Navy assignments in local hospitals, including one in New London, CT where he met his future wife, Mary Orfitelli of Manchester, CT who was a nurse there. While serving in the Navy he received various medals of honor including the United Nations Service Medal, The European Occupational Medal, the Korean Presidential Unit Citation, and the National Defense Service Medal. John was honorably discharged from the Navy in June of 1955 and was married to Mary in 1956. He eventually settled in Manchester, CT where they dedicated themselves to raising six children - five boys and one girl. John worked for several years at Orfitelli's Royal Ice Cream in Manchester and later went on to work at United Technologies Research Center as a machinist and fabricator of precision aerospace and aircraft engine parts. He retired from United Technologies in 1992 after 25 years of service. Years later John and Mary moved to Largo, FL where he loved to golf, bowl, and travel. John was also a long-time, active member of the Largo Elks Club and the American Legion. John was also an avid boater and sailor and was happiest when he was on the water, captaining his ship. John was preceded in death by Mary, his loving wife of 51 years, his 3rd born son Gary,  his parents John and Victoria; his dear friend and companion of ten years, Inge Desmore, his daughter-in-law, Dorothy Leonowicz and his four siblings - Irene Crane, Rita Viola, Henrietta Leonowicz, and Richard Leonowicz. He is survived by his children Steven Leonowicz and wife Mabel (of Largo, FL), Terry Leonowicz (of Manchester, CT), Paul Leonowicz and wife Lisa (of Hudson, FL), Robert Leonowicz and wife Dim Dobruck (of Port Richey, FL) and John R. Leonowicz (of Largo, FL) and daughter-in-law Raquel Alvarez Leonowicz;  nine grandchildren Jeffrey and wife Michelle, and Alan Leonowicz and wife Kristen Miley, Nicole McVeigh and husband Chris, Steven Leonowicz and wife Kristen, David Leonowicz and wife Valerie, Rachel Foster, Robert Foster, Christina Zaporta and Faith Leonowicz; as well as nineteen great-grandchildren, Karina and Tyler, Zaiden and Roman, Zachary, Jeff Jr., Dominic, and Abigail, Annabella, Gavin, Cayden and Sawyer, and Leonardo, Andrew and Mila, Kai, Kara and Keith, and Africa, his sister-in-law Dolores Leonowicz, and many nieces and nephews. A memorial service for John will be held at Saint Patrick's Church at 1507 Trotter Rd, Largo, FL 33770, on Tuesday, May 25, 2021, at 11AM. All are invited to attend. Immediately following the service, there will be a gathering at the Largo Elks Club, 810 16th Ave SE, Largo, FL 33771, at 12PM to 2PM, where food and drinks will be available for purchase. All are welcome to attend. People wishing to honor John's lifelong commitment to family and friends can make donations to the Largo Elks Club, or EWTN.

John V. Leonowicz of 29 Sabal Palm Drive, Largo, Florida, passed away on Thursday, May 13, 2021 at the age of 88 and died peacefully at Suncoast Care and Hospice Center. John was born in Philadelphia, Pennsylvania on December, 28, 1932, to... View Obituary & Service Information

The family of John V Leonowicz created this Life Tributes page to make it easy to share your memories.