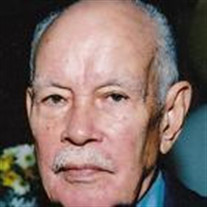 Jose was born in, San Lorenzo, Puerto Rico to his mother Dolores Melendez, father n/a he was the eldest of his siblings. He left P.R, and moved to New York City to start working at 17 yrs. old. He joined the Merchant Marines as a Seaman working... View Obituary & Service Information

The family of Jose M. Gomez created this Life Tributes page to make it easy to share your memories.

Jose was born in, San Lorenzo, Puerto Rico to his mother Dolores...