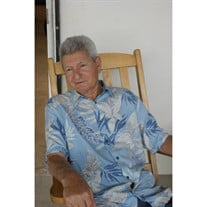 Joseph Bucaro, age 83, passed away on December 7, 2019 in Tarpon Springs, Florida. He is survived by his son S. Ted (Pamela) Bucaro of Kettering, OH, his daughter Suzanne (Chris) Mavrakos of Tarpon Springs. FL; and his four grandchildren Jill, Joseph (Katherine), Taylor, and Jordan. He is also survived by siblings Gaetano (Dora) Bucaro, Maria Buscaglia, Rose (John) Kelley, Tommasina (Leo) Jean Scola, Rosario (Erica) Bucaro, JoAnne Bucaro; and many nieces and nephews. He is preceded in death by his wife Renate Bucaro; his siblings Rosaria Bucaro and Nicoletta (Salvatore) Corsino; and his nephew Jason Kelley. Joseph was born on May 13, 1936 in Altavilla Millicia, Sicily to Salvatore and Anna Bucaro.  He came to America in 1954 and attained U.S. citizenship, of which he was most proud, in 1960.  Upon arriving, he lived in Chicago, then moved to Florida in 1981.  He first worked as a journeyman electrician and, shortly thereafter, became an independent businessman in the automotive industry. Joseph was a loving husband and father. He married Renate Weyerstall in 1961.  The couple had two children. He held a special place in his heart for his grandchildren and made sure to spoil them every chance he got.  He was devoted to his large Sicilian family and passed on his passion for his heritage to his children and grandchildren.  He was a dog person, having one nearly all his adult life.  A celebration of Joseph's life will take place on Saturday, December 14, 2019 at Russo Funeral Home at 4500 Roosevelt Road in Hillside, IL.  Visitation will begin at 10:00 a.m., with a celebration service starting at 11:00 a.m.  Guests will process to Queen of Heaven Cemetery in Hillside at 11:45 a.m. for a brief internment ceremony.  A reception for family and friends will follow at The Clubhouse at 298 Oakbrook Center Road in Oak Brook, IL to celebrate the lives of Joseph and Renate.  The family would like to extend its heartfelt thanks to family and friends for their prayers and support. In lieu of flowers, donations to Suncoast Hospice are requested.

The family of Joseph Bucaro created this Life Tributes page to make it easy to share your memories.