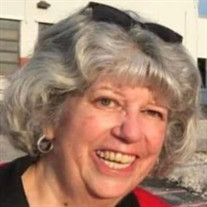 Katherine “Kathy” H. Biddle (Mrs. Biddle) passed away on March 15th, 2022 after a hard fought battle against stage IV breast cancer, with her husband Bob of 41 years at her side, surrounded by her family. Katherine was born at Morton Plant Hospital, the oldest of four children. She graduated from Clearwater High School in 1974. She earned her Bachelor’s Degree at Florida State University, majoring in Physical Education in 1978. While at Florida State University, she was a member (legacy) of the Sigma Kappa Sorority like her mother and was quarterback for the intermural football team-she could throw a spiral better than most of the boys! Katherine met her husband Bob, in 1979. They were set up by a cake decorator at the bakery that Bob managed. She stood him up for their first date because she had been enjoying time with her family and completely forgot about the date. Her love for her family, was one of the things Bob adored most about her. She remembered their next date and it is safe to say it went well. They were married on June 21st, 1980 and spent 41 years together as husband and wife. After college, Katherine returned to her high school alma mater as a faculty member, the place where she would spend the next 42 years teaching, coaching and mentoring generations of students. She took on many roles during her four decades at the school, some of those roles included: Physical Education teacher, Social Studies teacher, Girls Cross Country coach, Girls Track coach, Athletic Director, Graduation coach, Senior Class sponsor, Official Score Keeper for the State Champion Boys Basketball team, JV Girls Basketball team coach, Freshman and JV Cheerleader coach, and a second Mom to so many-if there was a school function or athletic event, Mrs. Biddle was most likely there! No matter what role she was in, she wanted the very best for her students and student-athletes not just during their time at CHS, but for their futures as well. As a coach, Mrs. Biddle and her student-athletes achieved success in both Girls Cross Country and Track earning multiple championships at Conference, Districts and Regionals and several appearances at State. Her tireless efforts, her passion and dedication to her school, her students and student-athletes did not go unnoticed by her peers. She received multiple honors during her career and Mrs. Biddle was always gracious and humble. Some of those honors included: In 1992: Kiwanis Track and Field Hall of Fame. 2006: Social Studies Teacher of the Year. 2007: Induction into Clearwater High School’s Varsity Basketball Hall of Fame. 2011: Pinellas County Schools Commitment to Excellence in Athletics. 2014: Suncoast Football Conference Association Administrator of the Year. 2018: First recipient of the Pinellas County Athletic Administration Leadership Award. Honorary Thespian for Drama. Pinellas County Schools Cross Country or Track Coach of the Year, 8 times. In 2021, she received maybe the biggest honor, when Clearwater High School’s athletic field was named after her: Katherine H. Biddle Field. She became the first woman in Pinellas County and possibly the first woman in the state to receive such an honor. It came as a complete surprise to her but no surprise to those that knew and loved her. And in 2022, she was recognized by the Clearwater Historical Society in their 3rd annual Women’s Exhibit. Katherine’s faith and her church were very important to her. She had been an active member of Church of the Ascension since birth. She served as a verger and on the vestry. It is the church where she was baptized, married and renewed her wedding vows. It is the church where her life will be celebrated. It may be hard to believe that Katherine had any free time, but like every other aspect of her life, she made the most of it. She was an avid FSU football fan, her and her husband Bob were annual pass holders to Disney. She loved Frozen, Elsa and the song “Let it Go.” Their trips to Disney were a stress reliever when she was fighting cancer and Disney was a place where she could just have fun and leave the worries behind. Katherine was preceded in death by her maternal grandparents: Jane and Carlton Farrell, her paternal grandparents: James and Helen Hershfelt, her father Thomas James Hershfelt, step-father William “Woody” Woodhouse, mother-in-law: Betty Biddle father-in-law: Robert Biddle and brother-in-law: John “Jack” Frank. She is survived by her mother Linda Hershfelt Woodhouse, her husband of 41 years Bob Biddle, Sisters: Susan Hershfelt Katte (Nick), Helen Hershfelt Avers (John) and Lynda Hershfelt Gorken (Greg). Sister’s-in-law: Beth Biddle, Joleen Frank and Kathy Wellens (Mike). Nieces and Nephews: Christina Katte Brantley (Stan), Mathew Katte (Taylor), Michelle Katte, Taylor Gorken, Kendall Gorken, Griffiin Gorken, Reed Avers, Erin Avers, Jordyn Avers, Cassie Jo Frank, Colin Frank (Kathy), Deakin Donley and Abby Wellens. Great Nieces and nephews: Grayson, Tessalyn, Maizie Brantley and Ethan Katte. The family would like to thank the doctors and nurses that helped care for Katherine, especially Dr Ben Yan, her Oncologist. Special family friends: Mike, Mary Anne, Keith, Stephen and Marilyn Mastorides. Principal Eric Krause and Pinellas County Schools Superintendent Michael Grego. To everyone who sent cards, stopped by Katherine’s office for a hug, shared memories, laughs and tears, to those who organized and donated to the Pink Out fundraisers, to her community, to her church, to her school, to her former and current students, student athletes, co-workers and friends: you were her hope, her strength and you were the reason she was smiling! A very heart-felt thank you to you all! She is FOREVER a Tornado and is cheering you on! A celebration of life will be held on Saturday April 16th at 1:00pm at Church of the Ascension, 701 Orange Avenue, Clearwater, FL. The service will also be available via live stream for those unable to attend in person. In lieu of flowers, memorials can be made to Church of the Ascension, the American Cancer Society, the ASPCA, St Jude’s or Metropolitan Ministries.

Katherine &#8220;Kathy&#8221; H. Biddle (Mrs. Biddle) passed away on March 15th, 2022 after a hard fought battle against stage IV breast cancer, with her husband Bob of 41 years at her side, surrounded by her family. Katherine was born at Morton... View Obituary & Service Information

The family of Katherine "Kathy" H. Biddle created this Life Tributes page to make it easy to share your memories.