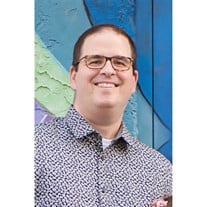 On Saturday, July 13, 2019, after battling metastatic follicular thyroid cancer for 5 years, Luis "Alex" Alejandro Gonzalez passed away peacefully surrounded by his family at the age of 44. He was born in Santo Domingo, Dominican Republic to Luis Manuel Gonzalez and Nelda Gonzalez Grullon on June 29, 1975. After finishing college, he moved to the U.S. with his family. They settled in Brandon, FL and he found a job in financial services, where he met his wife, Shannon Neal. They married August 10, 2002 and lived in the San Francisco Bay area for 2 years before moving back to the Tampa Bay area. He became a father on August 25, 2010 to Emma Isabella, his greatest accomplishment. Alex loved books (too much...we have a bookstore in our house), animals (even spiders that he caught and released outside), San Francisco (he always wanted to move back someday), food (he would eat just about anything), and above anything else his family. He was religious in seeing his parents every other weekend, texting his sister Monika and brother Gui constantly, and doting on his girls, Shannon and Emma. He was happiest spending time with us, whether it was going to amusement parks or lounging at home. He was smart, funny, generous, compassionate and embodied the word kind before it was the "in" thing to be. He was able to start a conversation with anyone and truly listened to what they had to say. He was well known at Moffitt Cancer Center because he would remember everyone's name from the cleaning staff to the doctors and everyone in between. He was a bright light wherever he went. The world became a little darker on July 13th. He is survived by his wife Shannon, daughter Emma, parents Luis and Nelda, sister Monika (Anthony) Curcione, brother Guillermo, half-brother Ando (Martina), one nephew, one niece, along with many uncles, aunts and cousins. A memorial service will be held at 1:00 pm, on Saturday, July 20, at Calvary Church, 110 McMullen Booth Rd, Clearwater, FL 33759. In lieu of flowers, the family has designated ThyCa: Thyroid Cancer Survivors' Association Inc. P.O. Box 1102, Onley, MD 20803-1120 and Tampa Bay Beagle Rescue Inc. P.O. Box 271772 Tampa, FL 33688-1772.

On Saturday, July 13, 2019, after battling metastatic follicular thyroid cancer for 5 years, Luis "Alex" Alejandro Gonzalez passed away peacefully surrounded by his family at the age of 44. He was born in Santo Domingo, Dominican Republic to... View Obituary & Service Information

The family of Luis A. Gonzalez created this Life Tributes page to make it easy to share your memories.