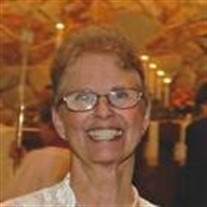 Margaret Christina "Peggy" Brown (nee: Olsen), age 75, went home to Jesus on April 4, 2016. She was born on January 21, 1941 in Seattle, Washington to Ivan H. and Francis (nee: Sullivan) Olsen. She grew up and attended school in the Greenwood area of Seattle. At an early age, she developed a love of ballet and trained and danced for many years.After high school, she worked for AT&T as a switchboard operator, later transferring to the Seattle office of the Washington Department of Transportation where she met the love of her life, Thomas Frederick Brown, on a blind date. They were married on August 21, 1965, at Woodland Park Presbyterian Church in Seattle. They set up housekeeping in Lynnwood, later moving to Mountlake Terrace, Washington, where their son, Thomas Ivan was born in 1968. Peggy devoted herself to being a wife and mother but managed to find time to be a school bus driver and then a library assistant in the Snow-Isle Library System. During those years, she was active in the Lady Lions Club and developed an interest in Middle Eastern dancing, which she insisted was excellent exercise.When Tom retired, they moved to Florida, living first in Brandon and then settling in Safety Harbor. They loved to travel, touring Europe when their son was stationed in Germany and taking many cruises with family and friends over the years.Peggy was proud of her Norwegian heritage and was very active in the Sun Coast Sons of Norway, serving on the Board of Directors for many years. She loved to dress in her traditional 'bunad', while dancing or reading folk stories to children.Her Christian community was very important to her and she found a perfect home at Holy Spirit Episcopal Church in Safety Harbor. She followed her calling as a member of the vestry, as church secretary and as a dedicated volunteer at the Thrift Shop. She especially treasured serving at the altar and working with the acolytes of whom she was very proud.Peggy was always bringing people into her personal circle, adopting them as family and showering them love and whatever help they needed.She is survived by her husband of 50 years, Tom; her son, Thomas (Daphne)Brown; her daughter, Pamela (Tim) Osborne; her sister, Laura (Rick) Wells; five grandchildren, Marrissa, Pete, Alex, Katie and Kimmy; brother-in-law, Jim (Chris) Brown; sister-in-law, Barbara (Joe) Pinchuk and close friends, Jim and Linda Barber and other wonderful friends, too numerous to list.

Margaret Christina "Peggy" Brown (nee: Olsen), age 75, went home to Jesus on April 4, 2016. She was born on January 21, 1941 in Seattle, Washington to Ivan H. and Francis (nee: Sullivan) Olsen. She grew up and attended school in the Greenwood... View Obituary & Service Information

The family of Margaret Christina Brown created this Life Tributes page to make it easy to share your memories.