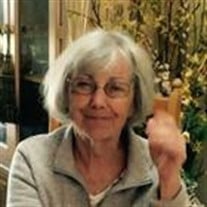 MARILYN MARIE EDWARDS BUSINESS OWNER, WIFE, AND MOTHERMarilyn Edwards passed away early Saturday morning, April 9, 2016 after winning her long 10 year battle with Alzheimer's. She was a devoted wife to John Edwards for 63 years. Their passion for life led them on many adventures around this planet. They met at Johnson's Pond in Rhode Island where her family had a Summer home. They were married on November 22, 1952 in Assumption Church, Providence, Rhode Island.Because John was in the United States Coast Guard, they had to move frequently. Marilyn followed him everywhere he was stationed. They started out in Florida. Next, they traveled to Rhode Island, Connecticut, Maryland, North Carolina, California, Texas, Ohio, New Hampshire, and Louisiana. All of the children came with us and she was a perfect mother. Jack and Marilyn's passion for life also created seven children. Two girls and five boys which in turn created fifteen grandchildren, sixteen great grandchildren and one great-great grandchild.Marilyn was a successful owner of two businesses. Any Blooming Thing Inc., a flower shop for ten years and a Gift Gallery (Disney and other collectibles) for five years. When She sold the business we went to Switzerland, Paris, France Germany, and Italy.Marilyn was well-known for her love of family and determination to make artful things. Although most of her self-made collectibles were paintings and mosaics, she also had her own loom and made wool yarn for knitting blankets. She also discovered the joys of owning goats. Her uncle worked at a race track and asked if she wanted a goat. One of the horse owners was getting rid of one and we lived on 5 acres. She replied, "Sure!" and set out getting the goat pregnant. We then had two nice goats, Buckey and Daisy. As a result, we had to keep the mother milked, so Marilyn made goat cheese daily.Marilyn was a great decorator and designer of homes long before it was fashionable. She designed, help build, decorated, and lived in several homes in Florida and in the Tennessee mountains.Marilyn will be missed for many reasons, but her passion for life and her lifelong determination to create and nurture her family has created an enduring legacy. The family requests that donations be contributed to the Alzheimer's Association at: http://www.alz.org/ or to Suncoast Hospice: http://www.suncoasthospice.org/Donate.

The family of Marilyn Marie Edwards created this Life Tributes page to make it easy to share your memories.