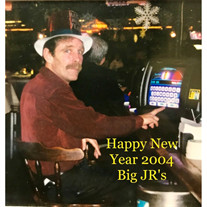 Patrick was a true man when it came to be in a man that had a heart of gold and a soft as an angel people know him as "The Mayor", "The "Goose" , "Pat", "Paddie"or just "Mongno" Patrick always was a hard worker live the simple life and never liked handouts he was so independent even when others offered to do something for him he would always turn it down he was definitely a true giving person he did so much for so many and was happy to do so as he was so handy because he taught himself to be a professional roofer, a mason, and construction actually he was a Jack of all Trades ! Being such a handyman everyone looked for him and he was always there to get the job done better than anyone and always reliable. He has a brother Gene and they always had the best stories of growing up and the things they did back then also Patrick was Gene's best man @ his wedding. As a boy of a single mother he was mischief but loved his mom more than anyone in this world and when she passed he was devastated. She always knew he liked to go to the bar and play pool as he was a real pool shark also loved the vodka there ! She would go fish him out and get him to leave when she would go looking for him. But Patrick always found his way back to havin fun because he had friends that he would meet there and made them like his family. He got a chance to play dad with Zack as he spent a lot of time helping when Zack was a toddler in daycare he'd go get him while Zacks mom was working. Over the years he always called Zack his boy and surprised him on Christmas Day one year with a bicycle looked like a motorcycle put it out back and called in the morning to tell him go out back that Santa came ! The day Zack got his driving license Patrick was so proud of him and now Zack graduating next week was a priority to be there. The sadest part Patrick won't be there. He did get the happiness of having the closest feeling he ever had to a child growing up though and in his wallet still has 3 school pics of Zack growing up. As for Tina... Was always protecting, and looking after Patrick and loved him dearly and of course she didn't like Patrick's drinking habits but saw past it because Patrick was a honest and pure sweet person ! Anyone that ever met him never said a bad word about him. He was friends with the best of the best to the bottom of the totem pole. That's just what a great guy he was ! He will be so missed by so many !

Patrick was a true man when it came to be in a man that had a heart of gold and a soft as an angel people know him as "The Mayor", "The "Goose" , "Pat", "Paddie"or just "Mongno" Patrick always was a hard worker live the simple life and never... View Obituary & Service Information

The family of Patrick James Mongno created this Life Tributes page to make it easy to share your memories.

Patrick was a true man when it came to be in a man that had a...