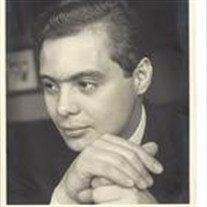 Pedro Rodriguez; 70 years old, of Safety Harbor, Fl passed away on June 25, 2015. Pedro was born in Mayaguez, Puerto Rico on December 20, 1944. He graduated from Aviation High School, in Queens NY, and enlisted in the USMC where he served 4 years. He started working for Pan American Airlines in 1966, and then Delta Airlines which added to his 45 year career as an Aviation Mechanic. He worked in all areas of the airplanes such as, mechanic/maintenance, electronics, and being a lead man. Pedro met his beloved wife Carmen in 1968, and they married on September 19, 1971. They lived in Central Islip, NY, Smithtown, NY, and finally Safety Harbor, FL. Pedro & his wife Carmen had two children; Yvette & Christopher, and five wonderful grandchildren. Pedro, and Carmen had so much fun together over the years, traveling to all around the world to places such as, Hawaii, California, Spain, Morocco, Italy, Portugal, California, Germany, The Caribbean, and Florida. His passion in sports was baseball, and football. He also had hobbies he loved such as long bike rides, kayaking, skiing, music, jazz, oldies, and his favorite were the Bee Gees. Family and friends never had to call a repair service, there was no need, because he could fix it all. Pedro was a very loving and caring caregiver to his wife, and always supported her in all of her needs. Pedro is survived by his beloved wife of 43 years, Carmen,one son; Chris Rodriguez, one daughter; Yvette Rodriguez, and his five grandchildren, Tevyn,Robert, Mikayla, Saliyah and Teyja. He will be truly missed by all who knew him, including his sweet little Holly, who was his precious dog.Memorial Services will be held on July 11, at 11am at Espiritu Santo Catholic Church, 2405 Philippe Pkwy, Safety Harbor, FL 34695.

Pedro Rodriguez; 70 years old, of Safety Harbor, Fl passed away on June 25, 2015. Pedro was born in Mayaguez, Puerto Rico on December 20, 1944. He graduated from Aviation High School, in Queens NY, and enlisted in the USMC where he served 4... View Obituary & Service Information

The family of Pedro J. Rodriguez created this Life Tributes page to make it easy to share your memories.