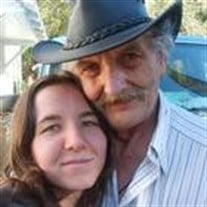 Mr. Richard Edwards passed away on July 11, 2013. He is survived by his daughter, Shauna, his mother, Betty and his sister, Cheryl.Shauna's reflections on her father:My father provided such a great life for me. Through his example, I learned that a father is someone who is a friend, who loves unconditionally; who is a teacher and a role model. A father is someone who is physically and mentally strong, who displays courage, skill, ability, independence and bravery. As a child, I learned many things from my dad. He would spend quality time with me; taking me horseback riding, swimming, to the movies and to the beach or park, where we would play "catch" for hours on end. He taught me to play air hockey and darts. He patiently taught me to ride a bike when I was 5 and how to throw a football when I was 8. By the time I was 7, my father was teaching me how to drive his truck and before long, I was sitting on top of a brief case with a pillow at my back so I could reach the pedals. Dad was sitting right by my side, cheering me on while I drove through the empty Wal-Mart parking lot. When I got more experience driving and my father thought I was doing well, he asked me if I wanted to drive on the road. This was at night, on the back roads where I used to live and there was only a car or two around. He always made things safe and easy for me to learn.There were so many road trips that we went on together that I can't even count how many there were, from childhood until I was an adult. I learned simple things about life from those adventures, as we never stayed in one place for long, always moving around. Some trips were for business as he was a salesman, and some were to Grandma's house with a surprise destination or two along the way. He made friends everywhere we went and I liked that about him. My father taught me many skills that I use in life and I am more independent because I have those abilities now. He knew when to help me and when to ease off and let me learn for myself. He was like no one else in my life. My father was such a relaxed person and his demeanor made it so easy for me to be myself around him. Because of him, I will carry these abilities with me forever.When we spoke, my father and I always said, "I love you" to one another and we would follow those words with a simultaneous, "to infinity and beyond." He was strong, smart, adventurous and magical. He showed me that one can grow up, live life and take on new responsibilities without compromising your childlike spirit. My father was truly a kid at heart, and I love him for that. He will be with me forever and always.

Mr. Richard Edwards passed away on July 11, 2013. He is survived by his daughter, Shauna, his mother, Betty and his sister, Cheryl.Shauna's reflections on her father:My father provided such a great life for me. Through his example, I learned... View Obituary & Service Information

The family of Richard Edwards created this Life Tributes page to make it easy to share your memories.