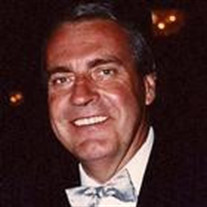 Mr. Richard (Dick) Lowell Musselman, 77, of Trinity, FL passed away on Friday, December 5, 2014 surrounded by his loving family after a courageous battle against heart failure. He was born on November 17, 1937 in Fort Wayne, IN. He graduated from Madison West High School in Madison, WI in 1955 and went on to earn his bachelor's and master's degrees in accounting from the University of Wisconsin. Dick was a proud Eagle Scout and Marine Corps veteran. He had an illustrious career as a business executive, working in sales and marketing for International Playtex, Revlon, DEL Laboratories and AM Cosmetics, among others. He finished his career as President/CEO of Marketing Muscle, Inc., where he provided marketing and sales consulting to a variety of companies. Dick had an impeccable work ethic and was an inspiring manager and mentor to all who worked with him. He was admired and respected for his innate intelligence and outstanding professionalism and business prowess. Dick had the distinct ability to analyze any situation and the absolute confidence in executing the best course of action. Because of this strength, many looked to him for advice in every facet of their lives and were confident that his guidance was flawlessly sound. Always a gentleman, Dick's strength of character, kindness, generosity, selflessness, perseverance and positivity will be greatly missed. His sense of humor was one of his most endearing qualities, and his wit and zest for life delighted all who knew him. Dick is survived by his loving wife and best friend of 35 years, Sally; daughter Kelly (Michael) Luscre and their children, Nicholas and Trey; daughter Keri Musselman; daughter Lani Preston and her son, Jake; and daughter Lisa (Jon) Scott and their son, Robert. He is also survived by his brother, Dennis Musselman, and several cousins, nieces, nephews, other relatives and friends. He was preceded in death by his parents Mildred (Gaskill) and Lowell Musselman and his older sister, Diane Mulholland. Dick will be remembered fondly as a devoted husband, loving father and grandfather, and great friend. In lieu of flowers, memorial contributions may be made in his name to the American Heart Association (https://donatenow.heart.org/) or the Wounded Warrior Project (https://support.woundedwarriorproject.org) A celebration of his life will be held on January 19th at 1:00PM at the First Presbyterian Church of Lakeland, 175 Lake Hollingsworth Drive, Lakeland, Fl.Dick's ashes will also be scattered next summer over Lake Winnepesaukee, NH, one of his favorite places.

Mr. Richard (Dick) Lowell Musselman, 77, of Trinity, FL passed away on Friday, December 5, 2014 surrounded by his loving family after a courageous battle against heart failure. He was born on November 17, 1937 in Fort Wayne, IN. He graduated... View Obituary & Service Information

The family of Richard Lowell Musselman created this Life Tributes page to make it easy to share your memories.