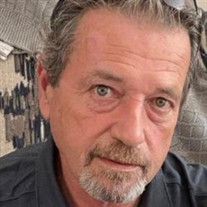 Ruben Andrew Roberto passed away at the age of 61 on January 5, 2022 Ruben is survived by his wife Helen Roberto of 42 years. His parents Raul & Ana Roberto, 3 daughters Jennifer, Kristyanna & Andrea, and his 6 beloved grandchildren whom he cherished each day of his life. He is preceded in death by his sister Lucy Ana Roberto, and son in law Edward John Galasso II. Ruben was born in Argentina. At the age of 3 his parents moved to the suburbs of Chicago, Illinois, where he spent his childhood and grew up. He graduated from Niles West, where he met and married the love of his life. In 1983 Ruben moved his family to Dunedin, Florida. Where he settled his family into a modest house that he called home for 39 years. Here he raised his 3 daughters and kept the doors of his home open, to be a place of refuge, acceptance and comfort to nephews, nieces, and friends of the family. Ruben had an affinity for automobiles & motorcycles. Working in his fathers auto body shops at a young age, developed his skills as a talented craftsman of autobody repair & restorations. With his wife they owned and operated their own auto body repair business. In his spare time he enjoyed making memories with his family, cooking & creating new recipes, relaxing by his fire pit, taking his grandkids fishing, and binge watching Netflix series with his wife. Ruben will be remembered as a kind, accepting, gentle man that loved his family and adored his grandchildren, including many great nieces and nephews. He was beloved by his family and will be deeply missed by all that know him. The man, the myth, the legend…Boppy His final resting place will be at Heartwood Preserve & Cemetery Trinity, FL. Friday, January 21, 2022 There will be a graveside service at 11am followed by a celebration of life. The preserve is 100% Eco friendly they ask that no outside materials unless biodegradable be brought in or left behind. Please plan to wear proper footwear as we will be hiking however golf cart services are available.

Ruben Andrew Roberto passed away at the age of 61 on January 5, 2022 Ruben is survived by his wife Helen Roberto of 42 years. His parents Raul & Ana Roberto, 3 daughters Jennifer, Kristyanna & Andrea, and his 6 beloved grandchildren whom he... View Obituary & Service Information

The family of Ruben Andrew Roberto created this Life Tributes page to make it easy to share your memories.

Ruben Andrew Roberto passed away at the age of 61 on January...