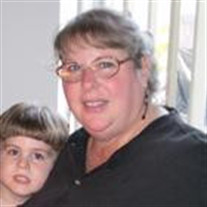 Shelly began life on the third of June, 1960 in Glendale, California. She is the daughter of Charlene and Gene Morrow. At the age of 7, Shelly moved to Ann Arbor,Michigan along with her mother and younger sister, Andrea, just a few blocks away from the Big House. For those of you who don't know, the Big House is the home of the University of Michigan Wolverines. Some of her favorite places from where she grew up were Zingermann's Deli, Washtenaw Dairy, the Art Fair, Ann Arbor Public Library, and of course, the Big House. In many ways, her heart never left Michigan. In 1972 Shelly and her family moved to the Tampa Bay area in Florida, where she eventually graduated from Gulf Comprehensive High School in 1978. After two years at the University of Florida, she graduated from the University of South Florida with a degree in education. However, anyone that knew her will tell you that she was always a Florida Gator. Almost immediately upon graduating, Shelly began her twenty-year teaching career at Pierce Middle School in Tampa where she influenced and changed the lives of many youngpeople.Shelly would mention aloud that she prayed to God for direction and for a man to love her unconditionally. (Be careful what you wish for.) Three weeks later, she found out that she was pregnant. On November 13th of 2003, she gave birth to Benjamin, who then became the center of her universe. While raising Benjamin, who gave purpose to her life, she continued to teach, substitute, tutor, mentor, and influence the countless young people who otherwise wouldn't have anyone to turn to. One of her favorite students was her nephew, Kyle.Unfortunately, around the time that Benjamin was born, Shelly was diagnosed with Lupus, a progressive chronic autoimmune disease that often flared up and attacked her joints. In spite of this, she continued her life and remained a loving mother, daughter,sister, and aunt. Many people never even knew that she had this disease. She lovedfootball, live music (especially the blues), literature, video games with Benjamin, gardening, and never missed the Renaissance festival.One of her greatest passions was cooking. Every family dinner and gathering always featured one or several of her amazing dishes. As Grandpa used to say, "Are the Tampa Bay Buccaneers coming?" There were always bountiful leftovers. One of the biggest fans of her cooking was Glynn Warwick.Ever since Shelly was a child, she carried a unique love for animals, in which she nurtured and cared for dozens of ill, mistreated, and abandoned cats and dogs. She was proud to be a "rescue home," as she called it and she often said that if "I had to choose between the animals and a clean house, I'm going to choose the animals."In 2011, Benjamin began a friendship with Dave Darling though playing "Wizards 101" an online video game. Benjamin then introduced him to Shelly, and the two clicked immediately. The relationship grew much deeper and resulted in Dave's moving to Florida in June of 2012, in time for Shelly's fifty-second birthday. They shared many ofthe same passions, but especially the rescuing of animals in need. The two remarked that they met at the exact perfect time in their lives where they were "both broken but they were better broken together."We never expected to be writing this so soon, but we know that she is in a better place.Her impact on those she loved, those she taught, and those she only knew for a brief time will always be remembered. We love you, Shelly. SERVICES Memorial Service Sunday, October 02, 20161:00 PM Sunset Point Funeral Home 2689 Sunset Point Road Clearwater, FL 33759

Shelly began life on the third of June, 1960 in Glendale, California. She is the daughter of Charlene and Gene Morrow. At the age of 7, Shelly moved to Ann Arbor,Michigan along with her mother and younger sister, Andrea, just a few blocks away... View Obituary & Service Information

The family of Shelly Ruth Morrow created this Life Tributes page to make it easy to share your memories.

Shelly began life on the third of June, 1960 in Glendale, California....