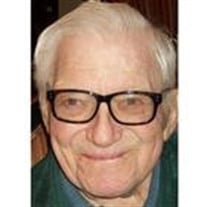 Theodore (Ted) John Plesnarski, 92, of Clearwater FL, passed away in his sleep on November 8, 2016 at the Belleair Health Care Center.Ted is survived by his daughter Andrea Plesnarski and her husband Tom Nugent, stepson Bill Bellsiano and his wife Debbie Bellsiano, grandson Scott Bellsiano, granddaughter Jennifer Buchak, sisters Wanda Osieja and Helen Ptsazynski, niece Melinda Saminski and nephew Mark Ptsazynski. Ted was a loving father and husband to his wife of 43 years, Inga Plesnarski, who passed away in 2009.Ted was born in Jersey City, NJ on October 24, 1924. His parents, Andrew and Catherine, were immigrants from Poland in the early 1900s. Ted and his sisters Wanda and Helen were a close-knit family celebrating each Sunday with a big family dinner. Ted served in World War II in Europe and was injured by a grenade explosion. He received a Purple Heart for valor and after hospitalization recovered from his injuries to attend school on the GI bill in art and music.In New Jersey, Ted owned a bar, restaurant, record company, and several other businesses. Ted and Inga were married in 1965 in New Jersey and moved to Florida in 1970. Ted was a commercial artist and sign painter and started the renowned business, The Sign Doctor, in Clearwater, FL. Ted single-handedly ran the business for more than 35 years providing signs, window painting, and elaborate murals.Ted loved the dog track and was a frequent matinee visitor at Derby Lanes in St. Petersburg. He continued to be active late in life with his concern for the world and for others. He was an avid letter writer to friends and politicians always with a desire to make the world a better place by creating equality for all people. Ted was supremely generous. He would buy lotto tickets for friends and strangers and was always trying to help others who were ill. He believed that change started with what he could do for others and would always give freely of his time and resources. He taught us all that starting from a place of love and gratitude will get you very far in life.Ted loved Polish music and loved to dance. He loved jokes, interesting cocktails, delicious food, ice cream, and chocolate.A memorial service with music and food is planned for January 7th at 1 pm at the Armed Forces History Museum, 2050 34th Way North, Largo, FL. SERVICES Memorial Service Saturday, January 07, 20171:00 PM Armed Forces History Museum 2050 34th Way Largo, FL 33771

Theodore (Ted) John Plesnarski, 92, of Clearwater FL, passed away in his sleep on November 8, 2016 at the Belleair Health Care Center.Ted is survived by his daughter Andrea Plesnarski and her husband Tom Nugent, stepson Bill Bellsiano and his... View Obituary & Service Information

The family of Theodore John Plesnarski created this Life Tributes page to make it easy to share your memories.