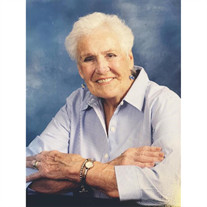 Theresa L. Biron,  91 Clearwater resident, Theresa L. Biron, died January 22, 2021 with her family by her side, at Mease Continuing Care in Dunedin, FL. Due to Covid-19, services will be held later this year at Espiritu Santo Catholic Church in Safety Harbor, FL. Mrs. Biron was born in Hartford, CN on October 18, 1929 to her parents, Aime and Vergenie Labreque. She grew up during the Depression and worked as a telephone operator and a Pan Am stewardess flying overseas, before marrying the love of her life, George R. Biron on November 15, 1952. Together they raised their nine children in Woodbury, N.J. In addition, Mrs. Biron was instrumental in starting a daycare in the inner city of Camden, N.J. In 1971, the family moved to Clearwater, FL.  There she became a Realtor in addition to her many family responsibilities. In 1985, she and her husband moved to Cabin John, MD where she became very active in her church, St. Bartholomew Catholic Church as part of their outreach program and as a Eucharistic minister and with R.C.I.A. In 1988, they moved to Denver, CO and she was active at St. Thomas More Catholic Church as a sacristan, Eucharistic minister, and as part of their evangelizing ministry. After her husband's death in 1989, she returned to Clearwater.  As a widow, she became involved with many charities. She continued as a Eucharistic minister and sacristan at her church. She was a cook at the St. Vincent de Paul Soup Kitchen for many years. She volunteered at the Kimberly Home Pregnancy Resource Center. She also made religious pilgrimages to Fatima, Portugal, Medugorje in Bosnia and Herzegovina and Jerusalem, Israel. She is survived by her nine children and their spouses, Virginia and James Brown, David and Tina Biron, Claire and Douglas Smythe, Stephen and Lynda Biron, Amy and Guy Guenthner, Timothy and Maribeth Biron, Elizabeth and Jeffrey Cap, Michele and James Gallagher and G. Raymond and Melanie Biron, as well as her 20 grandchildren and 11 great-grandchildren. She will be greatly missed by her family. She was preceded in death by her husband, George R. Biron. Donations can be made to St. Vincent de Paul Society or The Kimberly Home, both in Clearwater, FL. Condolences can be sent to Virginia Brown, 16233 Stanis Court, Jacksonville, FL 32218.

Theresa L. Biron,  91 Clearwater resident, Theresa L. Biron, died January 22, 2021 with her family by her side, at Mease Continuing Care in Dunedin, FL. Due to Covid-19, services will be held later this year at Espiritu Santo Catholic Church... View Obituary & Service Information

The family of Theresa Biron created this Life Tributes page to make it easy to share your memories.