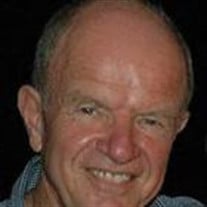 Trevor Whayne Charles Eisenman Jr. was a loving husband and father as well as a journalist and writer. He is survived by his wife Marit and his three sons, Hans, Trevor and Chris. He was 74 years old. A service will be held for him at the Ft. Harrison Hotel in downtown Clearwater, FL on May 28th at 11am. A second, Military service will be held Tuesday May 31st at 1:30 PM in Bay Pines National Cemetery, Bay Pines Fl with Military Honors. Whayne (the name he went by), lived in the Clearwater, FL area for approximately the last 15 years and passed away suddenly on May 19, 2011 of natural causes.He was born on December 12, 1936 in Hollywood, Los Angeles, California to Florence and Trevor Whayne Eisenman Sr. (who went by Terry). Whayne had an older sister, Gerry and two brothers, Rick (deceased) and Dan.Whayne often recalled how, as a child, he moved around quite a bit from town to town as his father, a self-taught electrical contractor, would move from job to job. His father wanted him to work in the family business but Whayne's passion was writing. His writing career, however, would have to wait until he finished getting his Bachelor's degree in Economics from Berkeley and his tour of duty in the United States Army. After volunteering for the latter he asked to be sent to Army Language School in California where he learned to fluently speak Russian. Upon finishing he was posted in German to work in Counter Intelligence for the Army. While there, he also learned to speak fluent German..After being honorably discharged in January of 1963 as a Sergeant and an Army intelligence specialist, Whayne decided to tour Europe and ended up in Spain. It was there that he met his future wife of 48 years, Marit Eriksson. She had moved there from Sweden to work as a secretary. They spent a year together in Spain and decided to marry just prior to Whayne having to return to America. They were married on the Rock of Gibraltar.Whayne also learned to speak Spanish while in Spain (he would later impress Spanish-speaking people with his friends and acquaintances with his command of the language).In 1964 the newly wed couple had their first son, Hans, followed by twins Trevor and Chris five years later. Whayne found an outlet for his love of writing as a journalist for the Hudson Dispatch. He later became the Assistant Sunday Editor for the Newark Star Ledger, the biggest newspaper in New Jersey. The Long Branch Daily Record hired him as Managing Editor, and he eventually became a journalist for the Associated Press in New York City.In 1970, Whayne moved to Miami, FL to take a job in public relations for an offshore real estate investment company called Amprop. Amprop eventually folded, and most of the people who had moved down to Miami with Whayne relocated to New York or New Jersey. Whayne and Marit decided the quality of life for their growing family was a higher priority than the abundance of work city life could bring them, so they stayed on Key Biscayne, FL, where they had been living.Whayne went on to do freelance work as a writer. A team of "story spotters" clipped newspaper stories from around the nation, and Whayne traveled the county interviewing and writing human interest stories, including a piece on Charles Atlas, well-known scientist and Nobel prize winner Linus Pauling and other similarly accomplished people. A prolific writer, Whayne kept 5 editors busy for several years. A dip in his writing was balanced out by purchasing a lawn mower and mowing lawns of local homeowners. This secondary back-up income quickly turned into a growing and thriving business under Whayne's direction. Over the ensuing 15 years it grew to a 30 man landscaping outfit grossing about $1 million/year.With the children off to private boarding school, Whayne and Marit scaled the landscaping business down to a boutique operation offering non-toxic pest control solutions and enjoy more flexibility. Often they could be found getting their work done early and heading off to the movies to enjoy each other's company.Whayne's greatest passion, next to his family, was helping others. For this reason he became an what is known as an "auditor" (meaning "one who listens") using the counselling technology developed by L. Ron Hubbard. He delivered well over 10,000 hours of counselling, helping improve relationships, families, friends and groups. He could always be called upon to assist someone who was in pain or who might have trouble with a spouse or business partner, often without any pay for his services--because he loved to help. His pay would be seeing that person doing better in their life.Even while retired in Clearwater, Florida, Whayne continued working to assist others in any way he could. Whayne was also known for his sense of humor and was always handy with a good joke or two. In addition to his three sons, he is survived by seven grandchildren and a great-grandchild.Last Wishby Whayne EisenmanPlace my small heartin another breast,perhaps a child'sor a tiny bird's,above a lake in an endless sky,its little hammer tapping outa rhythm old as time.With in the guise, will I rise to heightswhere gods now dwelland see all things belowas they really are,not the way they seem to be.When then I've learned the truth and doneand soared beyond what's left below,will I let my feathers fall awayand for this struggling pulseto slowand slip outthat I becomejust meto fly on silent wings,again..

Trevor Whayne Charles Eisenman Jr. was a loving husband and father as well as a journalist and writer. He is survived by his wife Marit and his three sons, Hans, Trevor and Chris. He was 74 years old. A service will be held for him at the Ft.... View Obituary & Service Information

The family of Whayne Eisenman created this Life Tributes page to make it easy to share your memories.