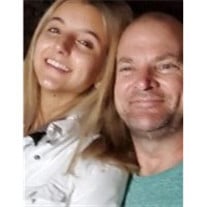 William Brian Mullinix, age 49, was born February 22, 1971 in Cincinnati,  Ohio and passed away April 22, 2020 in Pinellas County, Fl.   Brian grew up in St. Pete, Florida, St. Maries, Idaho and Portland,  Oregon where he graduated from Beaverton High School.  After a brief stint in college he and some friends spent about 7 years on Maui being surfing beach bums!  He returned to St. Pete in 1998 where he spent his working career as a flooring contractor.   Brian married Sandra Cassasbuenas in Bogota, Columbia in 1999.   They had one child,  Megan Marie Mullinix, now age 17, who was the light of his life and his very best friend.   He will forever be her Guardian Angel.  Brian has  a great group of very good friends who remember him as always being there for them when they needed anything and also as a happy, life of the party guy who loved going to the Bucs games and fishing.  He will be dearly missed!  Brian was predeceased by his grandparents,  Paul and Margaret Burgess who he always spent his summers with in St. Pete.  He is survived by his daughter, Megan Mullinix,  his mom and step dad, Bev and Scott White, his father, Bill Mullinix, step sister, Lindsay Mullinix, ex wife and Megan's mom, Sandra Parks, and numerous other relatives including those in Bogota and all of his friends.   It's not about weathering the storm but rather learning how to dance in the rain. .. Brian would want us to dance! A celebration of life will be held when allowed due to Covid 19.  Please feel free to leave condolences and/or pictures on Brian's Tribute Wall.

The family of William Brian Mullinix II created this Life Tributes page to make it easy to share your memories.